Brands aspire to be the creator of viral content that gets everybody talking about them. But with everybody trying to earn an extra 15 minutes of fame, combined with our still-decreasing 8-second attention spans, means that many brands attempting to start a viral trend ultimately create more white noise.

We love the following viral content mainly because of the intelligent, timely reactive marketing we saw in response to completely organic, per-chance moments.

After a young girl posted a picture to her Tumblr, social media exploded over a dress that appeared to be either blue and black or white and gold, depending on who was looking at it (it was definitely blue and black, though!). The post gathered 10 million tweets over 2 days from the public, politicians, celebrities and neuroscience and colour vision experts alike.

Some brands quickly jumped on the bandwagon, taking it as a perfect opportunity to create engaging content that was topical while reinforcing brand values around quality and equality: 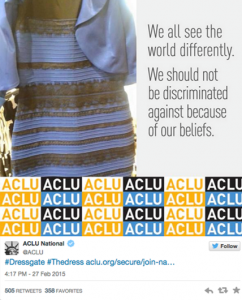 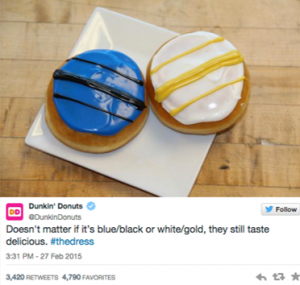 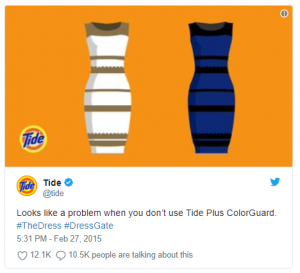 Carter Wilkerson asked Wendy’s how many retweets he would need a year’s supply of nuggets. Wendy’s replied: 18 million. 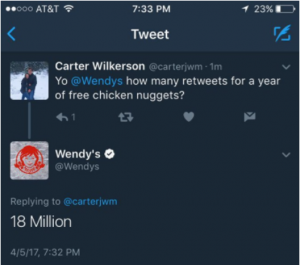 The response turned the Nevada teenager into a global hero on a mission that many supported. As with #TheDress, some brands related what was happening directly back to their business.

But simply seeing well-known, global brands joining in the conversation, even talking to each other about what was happening, made this particular viral moment especially bizarre, brilliant and memorable.

After breaking the record for most retweeted tweets, Wendy’s announced on Twitter that it gave Carter Wilkerson free nuggets for a year and donated $100,000 to the Dave Thomas Foundation, a non-profit that finds homes for children in foster care.

Rather than trying to engineer a viral moment, there’s a lot of be said for focussing your efforts on demonstrating awareness of smaller fads and cultural conversations. This can help to shape understanding of the younger generations, and sometimes collectively point to a larger trend, while also inspiring great marketing.

Reactive marketing, like the examples we’ve seen, generates incredible engagement for brands who join the conversation on what’s trending in social media. Tide, for example, usually only get a handful of likes and retweets, but on this occasion got more than 12,000 likes.

We’ll leave you with some tips about reacting to viral trends:

1: Keep an eye on your channels – if you’ve got the resources to be on Twitter, Facebook and Instagram every day, then do it. While most of the content uploaded will be white noise, potential marketing opportunities occur on here all the time, and they will happen with or without you.

2: Keep your message concise – be brief and to the point. And don’t explain the viral trend – if you use the relevant hashtags, people will know what you’re referring to.

3: Don’t break character – responding to pretty much any viral trend will require a bit of humour, and some clever engineering to relate it back to your brand. But while a timely response will grant big rewards, don’t do this at the expense of your brand voice. Co-opting slang that you don’t normally use might give the impression that you’re trying too hard.